Griz hit the mark with pair of San Diego kickers

For the first two years of his college career, Adam Wilson thought rugby was the sport for him. 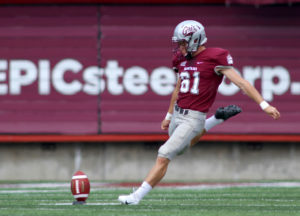 The San Diego native started playing the sport his sophomore year of high school and competed at Arizona, one of the top collegiate rugby programs in the country.

But this year, Wilson has shed his Wildcat jersey and brings a rediscovered love for football to Montana, where he now suits up as a kicker for the Grizzlies.

Four games into the season, nearly half of Wilson’s kicks have gone for touchbacks – his big leg combining with good Griz coverage, forcing opponents to start their drives on their own 20-yard line, on average.

“I liked rugby, at the time, a lot more, just because it was all-inclusive with running the ball, passing it, kicking it, all that stuff,” Wilson said. “But football is really what I love.”

Helping recruit Wilson is near the top of former high school classmate Tim Semenza’s contributions to Montana football this year.

But the greatest? His own near-perfect kicking record: 14 of 15 extra-points made plus all of his eight field goal attempts.

With his two field goals against Sacramento State last week, Semenza cleared the qualifying mark for career field goal and is officially the all-time leader in that category at Montana at 84.62 percent (22-for-26). His eight made field goals are the most in the Big Sky this season through four games.