Montana linebacker Dante Olson was named the Big Sky’s top defensive player for the third week this season after notching one of the greatest tackling performances in program history on Saturday. 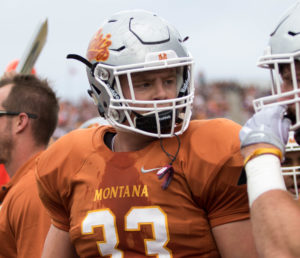 The junior recorded a career high 24 total tackles – half solo, half assisted – to help lead the Grizzlies to a 48-28 road win over Cal Poly.

That’s one tackle shy of a school record and makes Olson one of just four players in Big Sky history to log as many takedowns in a single game.

His selection Monday as the ROOT Sports Big Sky Conference Defensive Player of the Week marks his third such accolades in five weeks of football. It also marks the fourth time a Montana player has been recognized this season, with quarterback Dalton Sneed earning offensive honors following Sept. 22 matchup against Sacramento State.

Olson currently has 79 tackles on the year, putting him on pace for 174 for the season. The Big Sky’s single-season tackle record is 176 – set by Eastern Washington linebacker J.C. Sherritt in 2010.

Griz hit the mark with pair of San Diego kickers