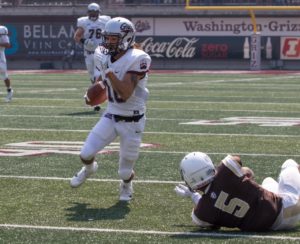 he flaws that lurked around the edges of Montana’s perfect start to the 2018 season burst into the spotlight in the closing quarter of Saturday’s road loss at Western Illinois.

Key among these were the inability to run the ball and a propensity for allowing special teams touchdowns – but the Grizzlies introduced some new ones as well on Saturday, including problems with ball control and an inexperienced secondary.

All in all, it was a brutal loss for a Montana team that now slips to 2-1 despite domination during a solid 50-minute stretch in the middle of the game.

Montana slips to No. 19 in latest poll

No Replies to "Griz slip late in road loss"