You’ve fallen in love with their voices, now it’s time to get giddy over their faces … 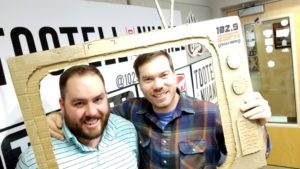 102.9 ESPN Missoula is excited to announce it has partnered with SWX Montana to bring Missoula’s only LIVE daily sports talk show to a television near you!

Starting Monday, Jan. 14th, Tootell & Nuanez will be broadcasting LIVE each and every weekday afternoon on SWX Montana stations across the state. If you have Charter Spectrum – or if you watch your TV via those old-school “rabbit ears” – you can now catch the show starting at 4pm Monday through Friday.

• For Charter Spectrum subscribers, catch the show on Channel 199 pretty much everywhere in the state, with the exception of Billings. In that market SWX airs on channel 503.

• Missoula and Kalispell area listeners can catch the show via regular antenna on Channel 23.3. If you live elsewhere in the state, just check your local listings.

Dish and DirecTV do not currently carry the channel, though we imagine that will be a top priority for Ryan and Colter heading into the spring. As you can imagine, no one likes the idea of depriving ANYONE in this great state from an opportunity to see these men in action each and every afternoon.

From local sports to national, with stops at Grizzly and Bobcat athletics along the way, Tootell & Nuanez are excited to bring their LIVE sports coverage and analysis to homes across the state beginning in early January.

Thanks for listening, thanks for watching, and happy holidays from your friends at 102.9 ESPN Missoula!

No Replies to "T&N heading to television!"