Montana added 21 new players to its football team on Wednesday during the opening day of the December early signing period, according to Montana Sports Information’s Eric Taber. 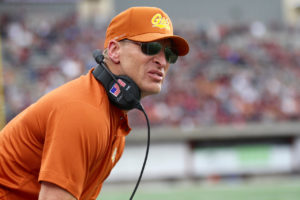 The roster additions include 20 incoming high school athletes as well as one transfer.

The class marks the first to go through a full recruiting cycle since Grizzly head coach Bobby Hauck began his second tenure with the school a year ago this month. Last off-season Hauck signed about half of this year’s total – players who had previously committed to former head coach Bob Stitt.

Also among this year’s recruits is running back Elias Dewaters, a first-team all-state punt returner last season at Sentinel.

“Montana guys have been, and always will be a priority for us,” Hauck said. “We are the University of Montana, and we want to recruit every Montana kid we think can help us win a championship.”

Leading the list of non-Montana signees is Kordell Pillans, a linebacker who will transfer to Montana after three seasons at Mesa Community College in Arizona.

No Replies to "Griz ink 21 in early signing opener"