One yard away from the end zone, with the entire state looking on and a chance to rewrite the entire narrative of their season, the Montana Grizzlies couldn’t escape the problems that have tortured them all fall. 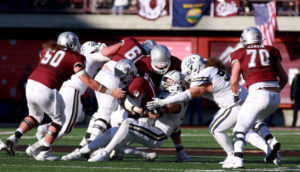 Adam Eastwood, just seconds after his apparent go-ahead touchdown was called dead due to a perfectly-timed timeout by Montana State head coach Jeff Choate, was popped at the 1-yard line by Bobcats defensive lineman Tucker Yates and fumbled. Montana State recovered the ball with 10 seconds left in the game, handing the Bobcats a third straight Brawl of the Wild win by the thinnest of margins.

“There are lots of ways to lose a game. That one is particularly gut-wrenching,” Montana head coach Bobby Hauck said following his third loss in eight games against Montana State. “To feel like you have it in your grasp a few times on the day and then not come out with it…good job by [Montana State] sticking with it and finding a way to get the W, and shame on us for not winning it.”

The last play was a witch’s brew of all the things that have cost Montana games this season.