For the third time since expanding 13 teams, the Big Sky Conference will send four of its program schools to the FCS Playoffs. 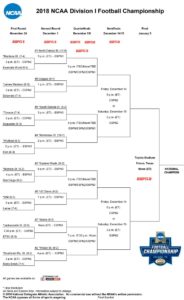 EWU’s lone loss came to Weber State; UC Davis’ lone loss came to Eastern; Weber’s lone loss was versus Northern Arizona. The playoff bid marks the Wildcats’ seventh playoff appearance in school history after winning back-to-back league championships for the first time. Eastern Washington ripped off four straight wins to earn its 13th bid to the FCS tournament – including 10 in the last 15 seasons. UC Davis will make its first playoff push since moving to Division I football in 2004.

Montana State (7-4) earned its first playoff appearance since 2014 after rallying from a 22-point deficit to knock off rival Montana, 29-25, on Saturday.

Round 1 of the FCS Playoffs happens this coming Saturday. Weber State will await the winner of Stony Brook-Southeast Missouri State, EWU will see the winner of Nicholls State and San Diego, and Davis will play either Lamar or Northern Iowa.

The Bobcats will host Incarnate Word in a first-round game at 1 pm Saturday; the winner of that one moves on to play at top-seeded North Dakota State the following weekend.

No Replies to "Bobcats among four Big Sky teams in playoffs"