The Montana Grizzlies face a tough rebound game this week. 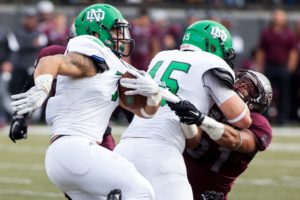 After uncharacteristically sloppy play cost them their perfect league record last Saturday versus Portland State, the Griz now head to North Dakota to take on the 3-2 Fighting Hawks.

No. 22 Montana could pick up another loss and still have a shot at the playoffs; looking at the remaining schedule, this Saturday’s game could very easily be the one.

Unranked UND, which is playing as an FCS independent as it transitions to the Missouri Valley Football Conference, was blown out by FBS Top-10 Washington and lost a very close game to Big Sky surprise team Idaho State. But they also beat a Sam Houston State team which at the time was ranked the No. 5 team in the nation.

The Fighting Hawks thrive on a running game that’s averaging nearly 250 yards per contest and a defense Montana head coach Bobby Hauck said may be the best his team has faced this year.

“It’s a big week for us, having to come off a loss at home and go on the road and get a win,” Hauck said. “This will be a tough trip. … The hard part is they’re very good.”

Kickoff for Saturday’s game is set for 12 pm in Grand Forks, North Dakota.