Fans looking for Montana to break out of its football slump might not want to hold their breath for this weekend. 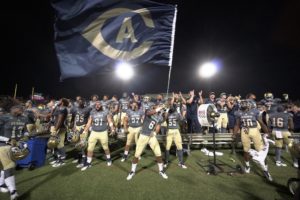 After dropping two straight going into last weekend’s bye, the Griz resurface Saturday to take on the top-ranked team in the Big Sky.

At 6-1 overall, No. 6 UC Davis has already won more games this year than they have in any single season since joining the league in 2012. They’re the lone undefeated team in the Big Sky, and their only loss on the year came to FBS powerhouse Stanford.

The Aggie offense is much more explosive than that of North Dakota, which put up 41 points on the Griz two weeks ago. And to make matters worse, a Montana win is all but necessary for the team to keep its postseason hopes alive.

“It’s a big week for us,” Montana head coach Bobby Hauck said during his weekly news conference on Monday. “We’ve got a Top 10 opponent coming in who has played really well in recent weeks. They are at the top of the league standings. They are going up and down the field on people. They are playing well on defense and certainly we will have our hands full.”

Kickoff for Saturday’s game is set for 2 pm at Washington-Grizzly Stadium.