He was born in South Africa, but his affinity for Montana Grizzlies football was established soon after being adopted by a Missoula family as a toddler. 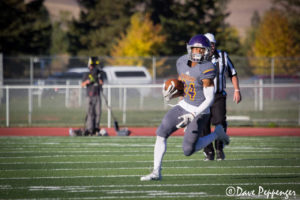 Now Elias Dewaters will suit up in maroon and silver as the 11th commitment for the Class of 2019.

“I just found this picture of me the other day when I was four or five in a Griz jersey,” the Sentinel High School standout said. “It’s just crazy to think I’m going to be wearing that jersey soon.”

Spartans head coach Dane Oliver, who himself played under Griz head coach Bobby Hauck in 2003, first started hearing about the athletic, shifty kid from Lolo when Dewaters was still in middle school. Oliver contemplated moving the talented running back up to varsity or junior varsity as a freshman in 2015 but waited to let the 175-pounder’s frame develop.

It was in the sixth game of his sophomore season that Dewaters showed the first flash of skill that has earned him a reputation as one of the most elusive players in the state. In a wild shootout with Kalispell Glacier at Washington-Grizzly Stadium, Dewaters returned a kickoff 95 yards for a touchdown.

“I knew from the day he came to Sentinel that he was talented but when he did that, I knew he had a real chance,” Oliver said.

-CLICK HERE TO READ THE FULL STORY AT SKYLINE SPORTS-

No Replies to "Sentinel RB Dewaters commits to Griz"