Griz head strong into second half of Big Sky play

It’s a trademark for Montana basketball this season: An unrelenting demand for excellence from fourth-year head coach Travis DeCuire. 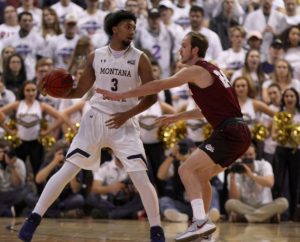 With a revenge win earlier this month over rival Montana State, followed by dominant defensive performances over Southern Utah and Northern Arizona, it’s a demand that seemingly each key player on the Griz roster has brought into full force.

“What we can’t start doing is patting ourselves on the back because we haven’t accomplished anything yet,” DeCuire said. “We are just hot. We’ve won some games. And we’ve had some guys have some really big games. But we have to stick together, stay hungry and stay desperate.”

At the midpoint of the Big Sky Conference slate, Montana sits atop the leaderboard at a perfect 9-0 with five of their final nine at home in Missoula.

Yet, just as DeCuire hopes, the Grizzlies remain unsatisfied.

-CLICK HERE FOR THE FULL STORY FROM SKYLINE SPORTS MONTANA-

Sain to return to Griz roots