Two ranked teams lost for the first time, but the league’s only Top 5 team managed to stay in the driver’s seat despite losing its All-American quarterback. 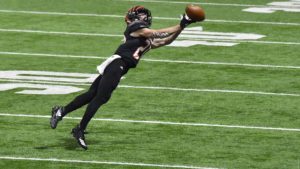 The first weekend of October was a wild one, to say the least, in the Big Sky Conference.

Both No. 7 Weber State and No. 14 Montana were upset, racking up their first league losses to unranked Northern Arizona and Portland State, respectively. The Wildcats forced three first-half turnovers but converted none of those into points, gaining just 176 total yards to fall 28-24 in Flagstaff. Montana held on to a close lead until a Portland State field goal in the final seconds cemented a 22-20 Viking win.

Filling in for the injured Gabe Gubrud, Eastern Washington backup quarterback Eric Barriere used his arm and feet to lead the Eagles to its fifth win in six outings – the junior accounting for three of EWU’s seven touchdowns on the day.

No Replies to "Wild weekend shakes up Big Sky standings"