Early in his career with the Grizzlies, Fabijan Krlsovic served as conduit during a coaching change. 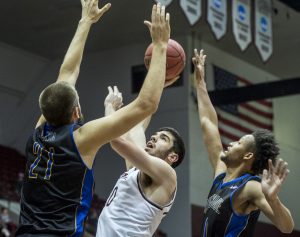 Four years of adversity later, the Australia transplant found himself in a leadership position as captain of a tournament-bound team.

Along the way he was honored with the Allan Nielsen Award as best representative of Griz basketball, the Naseby Rhinehart Award for “most inspirational player” and the Grizzly Cup, which goes to the top all-around male student-athlete at the school.

On July 5, Krlsovic – who returned home to sign with the Cairns Marlins the day after earning his degree from UM – claimed yet another prestigious honor: The Big Sky Conference’s Male Scholar-Athlete of the Year for Montana.

It’s the final feather in the cap for a player who has served as an unwavering example of the ideals UM head coach Travis DeCuire hopes his players strive to represent.