Backs to the wall, Griz OL has “embraced the grind”

After losing four starters from last season, Montana offensive line was already going to be one of the team’s most inexperienced units this fall.

Now with injuries to the lone carryover, Angel Villaneuva, and the retirement earlier this month one of the few linemen with game experience, Thayne Jackson, the uncertainty has gotten a lot more pronounced. 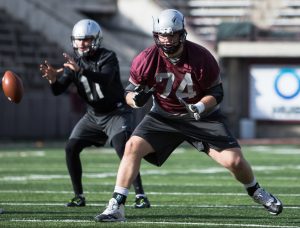 “We’ve got a lot of young guys … so it’s just them getting their playbooks, learning their plays,” said Dallas Hart, a redshirt junior and one of the veterans by default on the O-line. “I feel like us, as older guys, we’ve been trying to help the younger guys get in, so if one of us does go down, they’re right there to back us up and be ready to go.”

Other than Villanueva, only Hart, junior Cody Meyer and sophomores Dylan Eickmeyer, Brandon Scott and Conlan Beaver have played in games for the Griz, and none have started. To make matters worse, several others in that quintet are dealing with injuries – potentially leaving the unit in the hands of redshirt freshmen like Colton Keintz and Skyler Martin, defensive converts like Esai Longoria or a handful of true freshmen.

Faced with that pressure and turmoil, the players on the O-line – as well as position coach Chad Germer – have tried to just keep their heads down and, as every player on team will bring up when asked, improve everyday.

“We’re going into this with guys who have a little less experience than others, but I like that we’ve all embraced the grind,” Keintz said. “We’ve all done our best to get better. I think all the guys on the offensive line, be they the veterans or the rookies, all want to get better, and it shows.”

For more from Skyline Sports’ four-part series on offensive line units across the Big Sky, check out these links:

• After starting his career on defense, Kidd blossoming on Bobcat offensive line

No Replies to "Backs to the wall, Griz OL has “embraced the grind”"