If Montana head coach Bobby Hauck needs any reminder how hard it’s been to sustain success in the Big Sky Conference since his first seven-year stint in the league, he need look no further than this weekend’s opponent. 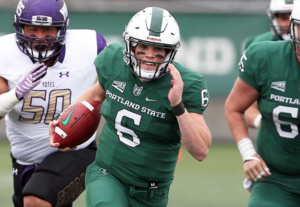 Portland State broke through to the No. 5 seed in the FCS playoffs just four years ago in head coach Bruce Barnum’s first season with the team. They won nine games that season, including five ranked FCS opponents and two FBS squads.

Since then? A gradual but persistent decline. A 3-8 overall record in 2015-16 and a 2-9 record after that. Last season the Vikings failed to log a single win.

Since Hauck first left Montana in 2009, only Eastern Washington has managed to stay relevant season after season with five league titles. Others that have tasted success – Montana State, Southern Utah, North Dakota, Weber State – have ultimately fallen to the back of the pack. Montana hasn’t been immune, falling from a national championship appearance in Hauck’s last year to a 2011 conference title to missing out on the playoffs entirely this past season.

This weekend, the tale of one team presumably on the rise again versus another struggling to earn its first league win in almost two years.

Kickoff for Saturday’s Montana-Portland State game is set for 2 pm at Washington-Grizzly Stadium.

HOMECOMING: Robby Hauck returns to his roots with the Griz

No Replies to "FIRST LOOK: Griz try to stay hot against struggling Vikings"