Montana outside linebacker Josh Buss has been named the Big Sky Conference’s preseason “Defensive Player of the Year”. 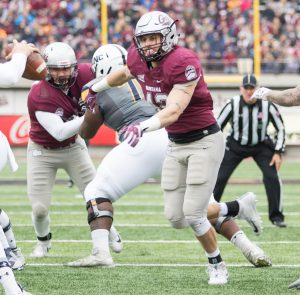 The fifth-year senior from Boise, Idaho, led the Grizzlies with 5.5 sacks and 94 tackles – including 13.5 tackles for loss – last season. He was named second-team All Big Sky and third-team All-American for his work.

The announcement was made Monday during the opening of Big Sky Kickoff in Spokane.

Davis led all of college football last season with 136.3 receiving yards per game, catching 115 passes for a total of 1,499 yards. He was named Big Sky’s “Offensive Player of the Year” and finished third in Walter Payton Award voting.

Buss was Montana’s lone representative on the team, with Montana State senior defensive tackle Tucker Yates the lone Bobcat on the squad.