UC Davis stayed one step ahead of the pack, but Eastern Washington and Weber State each remain right on their heels as each of the top-ranked Big Sky Conference programs all scored wins on Saturday. 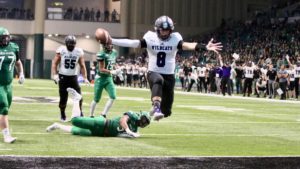 The Aggies scored 46 points in the closing 19 minutes of Saturday’s game at Montana to secure a 49-21 win and secure its spot at the top of the conference rankings with a 5-0 record.

Eastern Washington follows at 4-1 after a 38-14 win over rival Idaho – although the win was marred post-game by an announcement that injured senior All-American quarterback Gage Gubrud will miss the rest of the season.

Weber State won for the third straight week, posting a 35-30 win over No. 22 in Grand Forks.

The 1-2-3 ranking in the Big Sky is flipped upside down in this week’s STATS FCS Poll rankings, however, with Weber State taking the No. 4 spot followed by Eastern Washington at No. 5 and UC Davis at No. 6. Undefeated North Dakota state remains the top team overall, with Kennesaw State and James Madison filling out the top three.