Editor’s note: ESPN Missoula, the official radio station of the Missoula Osprey, will be producing features throughout this summer to help the Missoula community get to know the ins and outs of the Osprey roster and of Pioneer League Baseball in general.

On the bus, at the hotel, at home.

According to Marriaga, he’s taken in 10 games since the World Cup started 10 days ago in Russia, making him among the most devoted soccer fan on a roster that has a fair amount of them. That’s especially the case among the team’s Hispanic players, who seek familiarity as they adjust to a lot of new things: a new league, better competition, a new city.

Missoula is a long way from the Dominican Summer League, or even extended spring training in Maricopa County, Arizona, where nearly a third of the population is Hispanic. For Marriaga and his Latin American teammates, however, the World Cup provides a precious connection to home. 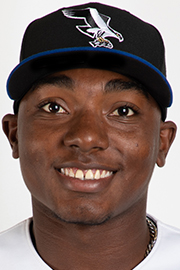 “Latin people are big soccer fans, so they’ve been watching,” said hitting coach Jose Amado, who’s from San Cristobal, Venezuela. “Soccer is big in Latin America, Colombia, Mexico, yeah, Venezuela. It’s really exciting, you know, waiting that day for your national team to play, to just be rooting for them and hoping to get a good result.”

Marriaga – from Cartagena, Colombia – is one of a few players who gets to root for their national team at this year’s tournament. The only others are Mexico natives Edgar Martinez and Luis Cossio.

Colombia’s national team, the Cafeteros, was one of the surprise stories of the 2014 World Cup. They’ve fared well again this time around, bouncing back from a 2-1 opening loss to Japan with a 3-0 beatdown of Poland on Sunday.

“The past two World Cups, including this one, have been really good for Colombia,” Marriaga said. “They just have to push a little more. I’m really excited to see what’s going to happen next game and the next round and then we’ll go from there.”

Games at the 2018 World Cup are being played in Russia, which means they’re broadcasting early in Missoula – starting at 9 am and running through the early afternoon. But that hasn’t stopped the players from tuning in.

Cossio, an outfielder from Baja Cali, Mexico, is among the dedicated viewers.

The Mexican national team, after some disappointing years, beat Germany 1-0 in their first game — perhaps the biggest upset of the tournament so far — and South Korea 2-1 on Saturday.

“I didn’t [expect that], because there was a lot of criticism on the national team from the World Cups before, and other tournaments,” said Cossio, whose favorite player, winger Hirving Lozano, scored in the win over Germany. “There’s just been a struggle. I didn’t expect that, but I was really excited and happy that it’s happening.”

Both Marriaga and Cossio played soccer growing up, as did many of the other Hispanic players on the team.

“Pretty much all the Latin kids play soccer when they’re growing up,” Amado said. “It’s the first thing they teach when we start walking, how to play soccer.”

They haven’t played much in Missoula. But during extended spring training, Amado said, it was common for a group to gather by the hotel pool. After the games ended and workouts were complete, there was always time to kick the ball around.

Aside from providing their soccer fix, both Marriaga and Cossio agreed that there’s something especially emotional about watching their countries play in the World Cup.

“It’s very patriotic,” Marriaga said. “It gives me chills. It’s my country; that’s where I was born, and it’s really exciting to see a team that belongs to your country play against the rest of the world.”