High expectations for Griz under Hauck

The news of his return sent ripples across the Big Sky Conference. 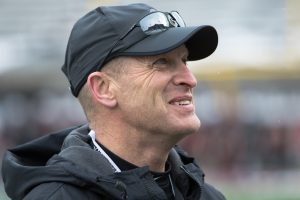 But make no mistake – all that joy comes splashed with quite a bit of reverence for the coach who left for UNLV at a time the Grizzlies were considered dominant in the Big Sky.

That reputation diminished considerably for Montana in recent years, with three different head coaches coming and going since Hauck’s departure in 2009. The team has not officially won a league title since that year, and after making the playoffs in 21 of 23 straight seasons they missed out on the postseason in each of the last two.

Hauck’s first to-do will be getting the storied Montana program back on track.

But the going won’t be simple. When Montana kicks off its season at home Sept. 1 versus Northern Iowa, they’ll be without four previous starters on the offensive line, they’ll have a new, still-yet-to-be-announced quarterback under center, and there’s still no word on the availability of the league’s preseason Defensive Player of the Year, Josh Buss.

But if anyone can do it, the league’s coaches believe Hauck’s the one.

“I’m not going to say the word scary, and this isn’t a criticism to where they were, but he’s a Montana guy,” Walsh said of Hauck. “He brings back that mentality that ‘we can win national championships’ not only to his team but to the community and to all those Griz fans that are up in Montana.”

Are you ready for some (fantasy) football?

No Replies to "High expectations for Griz under Hauck"