Until last week it had been 26 years since Montana football lost three in a row.

It was 1992 and Montana lost not just three, but four straight – their second-worst season performance on file since that dreadful 3-8 record in 1985. 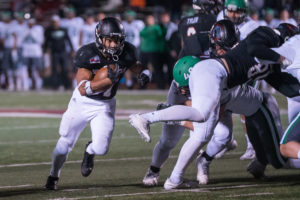 We’re not saying it’s that bad. But it very well could be that bad come Saturday, when the Grizzlies (4-4 overall, 2-3 Big Sky) head south to Cedar City to take on Southern Utah. We’re not sure which would be worse – extending the losing record to four, or falling to a Thunderbird team that’s won only once all season long (to last-place Sacramento State, no less).

Montana, in its first year under Bobby Hauck’s second go-round as head coach, has committed four turnovers in each of its last three. The slump started with the Grizzlies’ first home loss to Portland State and ended with its biggest tank in Washington-Grizzly Stadium history, a 49-21 stuffing by No. 6 UC Davis that included 46 unanswered points in the second half. In between was a 41-14 blowout at North Dakota.

The good news? After that horrible 1992 season, Montana went on to win out the Big Sky Conference the following year – making the Division I-AA playoffs for the first time since 1989, where they lost in the first round by a single point to Delaware.

The following season? Two rounds deeper in the playoffs, where they beat Northern Iowa and McNeese State before falling to Youngstown State in the semifinal game. And then, of course, came 1995.

But let’s worry about all that later. For now, let’s just stop the slide at three.

No Replies to "FIRST LOOK: Griz look to stop slide in Cedar City"