All stats current through games of August 2

It took a rain delay to snap Zach Almond out of an early-season slump for the Missoula Osprey and make him a Pioneer League All-Star.

After going 0-for-5 with three strikeouts against Helena on June 27, his average had cratered to .269, and the power hitter didn’t have a single homer on the season.

After a couple days out of the lineup, it didn’t look like it would get any better, as Almond started the June 30 game against Billings 0-for-3 with another strikeout.

But then came the rain — and a fortunate talk with hitting coach Jose Amado. 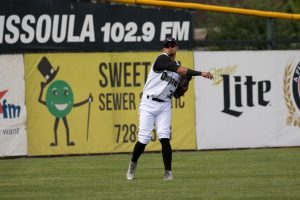 It wasn’t that he was taking bad swings, Almond explained to Amado during the delay, but that he felt that his timing was off — his foot wasn’t getting down quick enough, making him late on pitches.

Well, what should I do?

The Osprey catcher would go on to homer in three consecutive games, emphatically ending his slump, and has since been one of the best hitters in the Pioneer League.

His nine homers are tied for the league lead, his 36 RBIs are fifth, and his .607 slugging percentage is fourth.

On August 1, Almond was named one of the two Osprey position players to make the Pioneer League All-Star team, along with third baseman Buddy Kennedy.

The two took on the best players the Northwest League has to offer on August 7 in Grand Junction, Colorado.

It’s a reward for the first half of the season and, for Almond, a vindication for the adjustments he’s made.

“I give [Amado] all the credit, because if he would have never done that, I probably, definitely wouldn’t have been an all-star,” Almond said. “So I’m thankful to have the coaching staff that I have, and be able to talk to them and communicate and fix things that need to be fixed.”

Shortening his stride isn’t the only adjustment Almond has had to make this year.

In extended spring training, he was dropping his back shoulder too much, trying to create a steeper launch angle and hit more balls in the air.

Working with Benjamin, Amado and former major leaguer Jonny Gomes solved that problem, but when he got to Missoula, Almond was presented with another challenge.

Zack Shannon was the only first baseman on the Osprey roster, and, in an effort to give him some days off and keep Almond’s bat in the lineup, the coaching staff asked Almond to moonlight there.

He hadn’t played first base since high school, but Almond has been putting in the work to be competent there, taking ground balls every day before games.

“I’m thankful that they have confidence in me over there,” Almond said. “It’s a work in progress, so I just keep grinding it and try to figure it out. … You have some of these guys that are big left-handed hitters, they can scorch one at you and you’d never know. It’s just getting comfortable, that’s the only thing.”

Being able to play multiple positions should increase Almond’s chances of making rosters as he progresses through the minors, meaning that first base might become a permanent home.

For now, though, the adjustments that he’s already made have been good enough to make him an All-Star.

“I wasn’t expecting anything coming in, I was just trying to play good and help my team win as much as I could, and I’ve been having a lot of fun playing with these guys,” Almond said. “It’s a huge accomplishment. That was my goal, was to come in here and be an all-star and represent Missoula in the all-star game and also represent the Arizona Diamondbacks.” 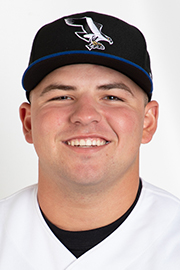 Kennedy, meanwhile, has been impervious to the ups and downs that usually mark a baseball season. He had a 17-game on-base streak earlier in the season, and his average hasn’t dipped below .310 since the fourth game of the season. He’s currently hitting .331 with four home runs and a team-high 49 hits.

“We pretty much knew Buddy was [a good hitter], just from what we saw in extended,” Osprey manager Mike Benjamin said. “He’s that kid that, you want to say, plays on an even keel. You don’t really see him super excited. You can see a little bit of frustration at times, but it’s not anything that lasts more than a little bit.”

Both Almond and Kennedy came to the Diamondbacks organization in the 2017 draft, although Kennedy, a fifth-round pick from Millville High School in New Jersey, was selected a full 30 rounds ahead of Almond, a catcher from Catawba College in North Carolina.

As a high draft pick and fixture on Diamondbacks prospects lists, Kennedy drew a fair amount of attention when the season started, and didn’t disappoint, homering in Missoula’s home opener and then going 3-for-5 with another dinger the next night.

The good start made him a fan favorite.

“I was having a good extended, and then when I came in here I tried to have the same mindset,” Kennedy said. “Just do what I’ve always done since I was a little kid, have fun and try to see my pitch, hit it. I’ve been swinging the bat good, luckily, and everything’s going good so far.”

At just 19 years old, the fact that he’s hitting so well in the Pioneer League bodes well for his career chances and, if the Diamondbacks decide to challenge him, he might not be playing at Ogren Park for much longer.

If there’s one thing he’ll have to work on in the second half, it’s his defense. Kennedy has committed 10 errors in just 94 chances at third this year.

“I’m just trying to be more soft with my hands, and just trying to relax,” Kennedy said. “I think just being more relaxed and judging balls different ways [will help], either a drop step or coming after it. But I’d say other than that, everything has been good.”

If he can iron out those issues, Kennedy’s hitting has the potential to carry him a long way.

“Buddy, his arms are so short and he’s so quick, he’s just hard to beat with fastballs and he’s pretty good about being able to fire on a hanging breaking ball,” Benjamin said. “There’s times you think he’s going to get beat with the fastball and he manages to get to it, which, like I said, you go back to those short arms and the quickness that’s in there. That allows him to see the ball longer, and I guarantee you that’s why he doesn’t have a problem with offspeed.”

Andrew Houghton is a freelance journalist living in Missoula providing content for the Osprey on 1029ESPN.com.

“It’s given everything to me”: Oropesa’s long baseball journey continues with Osprey