Two months ago, Mack Anderson thought the Montana basketball coaching staff was leaning towards giving him a redshirt for his freshman season. 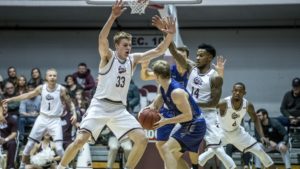 Thanks to his athletic displays in practice and, perhaps more importantly, an early-season wrist injury to all-conference big man Jamar Akoh, that plan changed in a hurry.

With Akoh’s absent most of November, head coach Travis DeCuire has been leaning harder on Donaven Dorsey and Bobby Moorehead – both listed at 6-foot-7 – to fill the void. But as the saying goes, you can’t teach height, which means inevitably DeCuire has been finding ways to get the Anderson (6-foot-9) and fellow young big man Kelby Kramer (6-foot-10) onto the floor.

And although the score sheet isn’t all that impressive — Anderson is averaging 3.6 points in just over 13 minutes a game, Kramer 1.6 points in 9.4 minutes — DeCuire said he was happy with the way the two have stepped up given everything he’s asking them to do.

“I think sometimes you just have to put them out there, and you’ve got to make them go for it, and give them confidence, let them screw it up, let them make mistakes, let them have success, let their confidence grow, and then see what happens,” DeCuire said. “Based on how we play and what they’re being asked to do, they’re ahead, I think, based on where most bigs would be, given their experiences.”