Bobby Hauck’s return as head football coach at the University of Montana last December was many things, but quiet was not one of them. 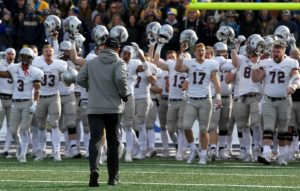 painful inroads made against violent and sexual crime, Hauck was a splash hire if there ever was one – for better and for worse.

In the days following the announcement, objections ranged from concern to outright accusation. And each of these was addressed – not not likely allayed – by Hauck himself at his introductory press conference. Then again at a town hall meeting, where he was joined by UM athletic director Kent Haslam, newly hired President Seth Bodnar, and several community members.

Among those on stage with Hauck that day – Missoula resident Lisa Davey, who found herself both the mouthpiece of those decrying Hauck’s hiring as well as the victim of malicious, web-based attacks – yet another stark reminder that whatever culture shift has taken place in Missoula there is still ground to cover.

Just or not, the incident was just further evidence for those opposed to the hire that Hauck’s presence on the Montana campus was an inflammatory link to the dark underbelly of a drunken, chauvinistic football hooliganism that has inculturated itself in Missoula.

The return of Bobby Hauck as the head football coach at the University of Montana in December of last years was many things. Quiet was not one of them.

-CLICK HERE TO READ THE FULL STORY AT SKYLINE SPORTS-

High expectations for Griz under Hauck