For college baseball players coming into the minor leagues, the biggest change isn’t the paycheck – it’s the schedule.

Whereas college teams usually play weekend series – Friday, Saturday, Sunday – to mesh with an academic schedule, an off day is a rare luxury in a professional schedule.

The transition is even more difficult for rookie pitchers, who are used to throwing once, maybe twice, in a given week during college.

“Just adjusting from three or four games a week to six or seven games a week now, playing every day has been real different,” Osprey pitcher Landon Whitson said. “I’ve been able to figure out ways to get my arm used to it, my body used to it, and stay in good enough shape to have good stuff throughout the season.” 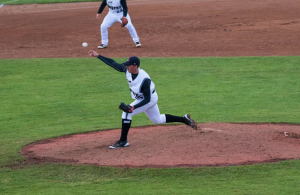 Whitson was probably one of the college pitchers on the Osprey most ready to adapt to the new schedule after appearing in nearly half of Lenoir-Rhyne’s 49 games this spring as the relief ace for the Bears.

He pitched to a 2.01 ERA in 31.1 innings, recording a team-high nine saves. But even after the busy college season he has had to make some changes to adjust to the workload in the pros.

It’s not the first time Whitson has had to adjust his routine in his career.

He started in eight of his 12 appearances his sophomore year at Lenoir-Rhyne and four games as a junior in 2017. He struggled in those years, putting up ERAs of 5.09 and 6.75, respectively, before turning into a full-time relief ace in 2018.

As his role changed, so did his routine, training and mindset.

“I think it’s helpful for me to go in thinking, ‘I’ll go in and attack each batter at a time out of the bullpen,’” Whitson said. “As a starter, I was thinking that I have to go five innings to give my team a chance … and now, as a reliever, I’m thinking, ‘I’m only guaranteed this batter, and I’m trying my best for that batter.’”

Because of the way the college game works, most of the recent draftees on the Osprey roster have at least some experience starting and relieving in their careers.

That’s helpful for pitching coach Shane Loux as he tries to cobble together a rotation and bullpen.

For instance, pitchers Jacob Stevens and Tyler Jandron, both of whom recently left college, are making the opposite transition as Whitson – from primarily starters in college to the bullpen with Missoula.

“Most of the guys have started at some point in their career, and as they’re adjusting to pro ball, they’re also adjusting to new roles that we’re asking them to do,” Loux said. “It’s a big change to go from pitching once a week in college to being ready to throw three or four times a week, so there’s a lot of learning that needs to be done.” 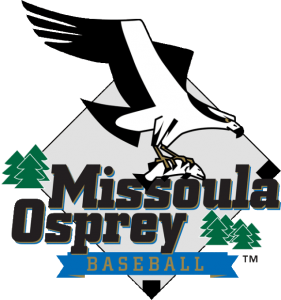 Loux’s experience — he pitched professionally for 18 years, making it to the majors five separate times — can help him coach his pitchers through the adjustments they need to make.

Loux made 295 starts and 113 relief appearances in his career, meaning he’s filled just about every role possible, which helps him relate to players like Whitson.

“One of the things that we have that we can bring is experience,” Loux said. “So, in my career, I’ve kind of been it all and done it all, and whether I was pitching good or bad, that’s irrelevant, what matters is that I got prepared for every one of them. And we can pass that along.”

In the end, though, the impetus to make the right adjustments falls on the pitchers themselves.

They’re learning that at the professional level, more than anywhere else they’ve ever pitched before, what matters isn’t the quality of their stuff as much as their preparation, adaptability and ability to get outs every night if called upon.

“[I want to] just be more consistent and find a way to be able to get something out of every outing and have success with that,” Whitson said. “To be able to adapt to change, I think that would be big for me, is if I can be able to handle adversity better, be able to adapt to things in a variety of ways to where I can still find success.”

Andrew Houghton is a freelance sportswriter providing features on the Missoula Osprey for 102.9 ESPN Missoula. His work can also be found on skylinesportsmt.com.

No Replies to "Going pro requires adjustment for college pitchers"