COMMENTARY: Fierce football rivalry belongs to all of us

The cyclical nature of seasons is one of the great realities of life in Montana. 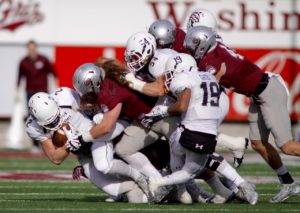 Four distinct and absolute quarters have dictated our lives here for centuries. The planting, the harvest, the hunt, the recreation; the fires in the forest, the fires in the hearth. That great universal equilibrium which brings us in the North to rest in warmth and now in cold. The solstice, the equinox, the orbit, immutable as time itself.

In Montana, the seasons move us out of deep freeze into rebirth and sun and back again through that autumnal door. We now find ourselves in winter’s antechamber, slowly but certainly crossing the threshold from warmth to cold, light to dark, thawed to frost. And one event every year for over a century has signaled the emphatic punctuation to the end of another season.

When the Bobcats and the Grizzlies kick off at high noon in Missoula on Saturday, more than a football game will be taking place. It’s a cultural phenomenon. All rivalries want to lay claim to being the biggest and best, the most fierce or most important. Those are subjective, shifting titles usually employed as mere assertions by strident fans looking for individual relevance. The reality is, none of that matters.

What makes all true rivalries great has nothing to do with size, scope or standing. What matters is the intensity of the participants and the import to the community. For Cat-Griz, the intensity is maximal, the import complete.

No Replies to "COMMENTARY: Fierce football rivalry belongs to all of us"