UC Davis kept its spot in front of the pack, but Eastern Washington and Weber State stayed nipping at the Aggies’ heels as several Big Sky Conference teams continue their playoff push in the final stretch of the season. 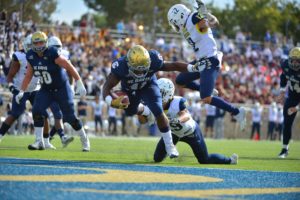 Idaho State (5-1, 6-3) kept its unlikely playoff push alive with thrilling 48-45 victory at Portland State, ending the Vikings’ already dim playoff hopes, and North Dakota is also likely out of the postseason picture after falling 31-27 to Idaho in the teams’ first face-off since 2011.

And for the first time since late September both Montana programs logged a win on the same day, the Grizzlies halting their turnover purge to beat Southern Utah, 57-14, and the Bobcats knocking out Cal Poly, 49-42. Both Montana and Montana State are now 3-3 in league play and 5-4 overall after the wins.